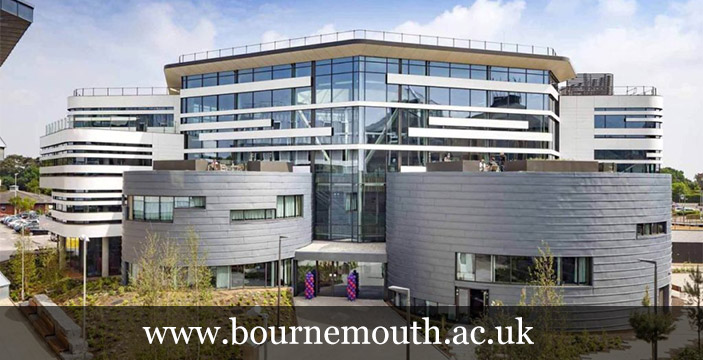 Bournemouth University is a public university in Bournemouth, Dorset, England, with its main campus situated in neighbouring Poole. The university was founded in 1992; however, the origins of its predecessor date back to the early 1900s.

The university currently has over 16,000 students, including over 3,000 international students. The university is recognised for its work in the media industries. Graduates from the university have worked on a number of Hollywood films, including Gravity, which was awarded the Achievement in Visual Effects Oscar at the 86th Academy Awards in 2015.

In 2017 Bournemouth University received a silver rating in the Teaching Excellence Framework, a government assessment of the quality of undergraduate teaching in universities and other higher education providers in England.

The university was first founded in the early 20th century as the predecessor Bournemouth Municipal College. The college initially offered courses to prepare students for University of London degrees (1942-1976).[5] In the mid 1960s there were 6,850 day and evening students.  As early as 1965, in the House of Commons, the number of students at the college was highlighted, and the Secretary of State was asked to consider a university application.  At the time the Government did not intend to create any new universities until the late 1970s,.

Bernard MacManus was appointed Director in 1983 and presided over a significant expansion in curriculum and student numbers, against a backdrop of initial uncertainty over the Weymouth Campus.[7] During this time the Talbot Campus was consolidated having been established in 1976. The neighbouring Student Village was also constructed. A second campus was established at Lansdowne. The period between 1983 and 1994 saw the Institute expand into new disciplines including heritage, tourism, tax, public relations, computer animation and information systems.